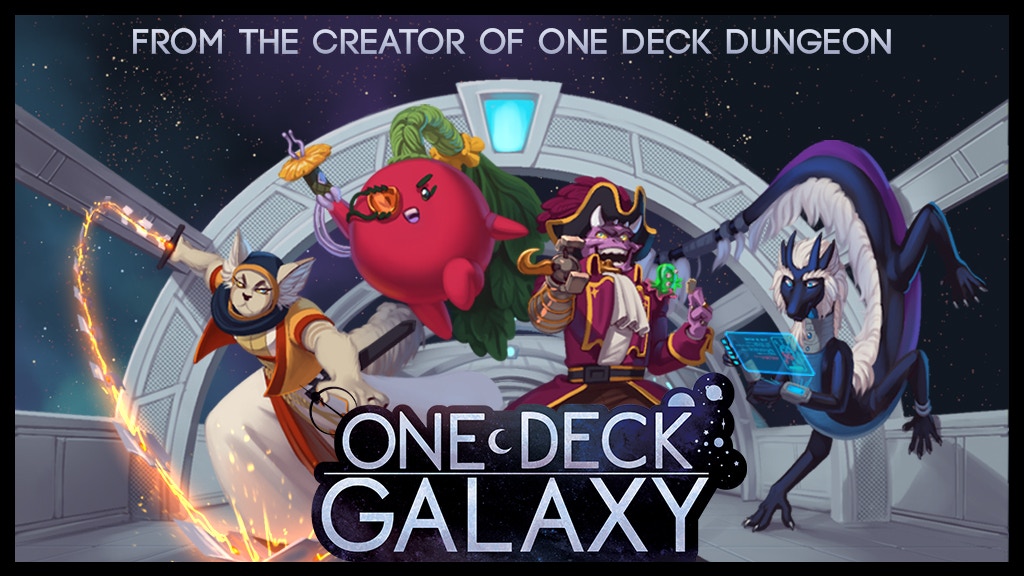 
We've been working on better shipping options and we're pleased to announce that we've reduced the shipping costs for Asia and Australia, as listed below:

We'll continue to work on partnerships and find options to get games to everyone we can as safely and cost-effectively as possible! The teleporters are still, well, undergoing testing.

This Sunday, we'll be doing a 4-player stream of One Deck Galaxy with our friends at https://www.twitch.tv/brain__in_a_jar

Join us for some fun - Adventure guaranteed, chaos optional!

At $100,000, we unlocked a stretch goal for Campaign Mode, which many of you may remember as one of our original stretch goals for One Deck Dungeon, as well! As with many other concepts in Galaxy, we've evolved the ideas and mechanics for a campaign sheet into something new and exciting. We're tentatively calling this mode the Galactic Gauntlet.  (No, not that gauntlet. This is quite finite!)


I'm sure you're excited to see the concept, so without further ado, here's a Campaign Sheet! There's a lot going on here, and we'll explain it all below! This sheet is a work in progress, we'll be refining the design and testing things more between now and going to print.

A Maze of Amazing Abilities

The very first thing you'll notice, of course, is that this campaign sheet isn't a list of abilities, it's a connected network of possible upgrades.  After each game in your campaign, you'll get to solidify two dotted lines, giving you access to Jump Start Nodes and Special Actions. Jump Start Nodes give you dice, fleets, or science before the first turn of each game, giving you, well, a jump start! Special Actions are once-per-game activations. You'll place a tech disc to show that it's been used, and gain a really special effect. Some special action spaces are continuous abilities, like the ones above that reduces all large boxes' values by 1, or drops the cost of launching a probe.

Each Galactic Gauntlet only lasts for seven games. Your goal is to defeat as many stars worth of Adversary in that time as you can! As you gather upgrades, you can be more ambitious in challenging the toughest Adversaries. Changing your Homeworld and Society Type is also important, you'll only get to fill in lines if you're trying out new combinations!

You'll notice that this is Campaign Sheet #17. The pad of 25 sheets are all different, with varied mixtures of nodes and actions. Every Gauntlet run will be different! PDFs of the sheets will be available at OneDeckGalaxy.com as well, although if you manage to play through the 175 games of One Deck Galaxy to run out, that'd be quite the Heroic Feat.

It's Monday, and thusly a fresh new week of adventures in space - or for most of you right now, on our fine planet Earth.  Hope everyone had a fun weekend! We've cruised nicely past our main and stretch goals, and we're excited about pushing toward the first Galaxy Goal (And we'll be sharing some details about our Campaign Mode tomorrow, it's pretty neat).

We've fixed a few little bugs in the Tabletop Simulator module, and enhanced the way it handles Event Cards (Especially with the Hungry Nebula). After some final testing, we'll be pushing an update out for that tonight. Thanks to everyone that's already given it a try in TTS, it's a neat platform for showing games to folks everywhere, especially in a year when conventions are hard!

I will be joining James Staley of Board Game Binge to tape an interview tonight for their podcast, which will be broadcast live on YouTube at https://www.youtube.com/watch?v=eIaYkH1IrVs. It starts at 6PM Eastern, which is in just a couple hours! Come say hi in chat, or listen later at https://boardgamebinge.com/.

We'll be running more demo streams later in the week, currently planned for Thursday and Saturday evenings. Stay tuned for more details - and if you've got requests for what to demo, let me know!

Greetings, Galactic Backers! (see? It's cooler when you add "Galactic". Perk of joining the campaign!)

That's a lot of backers. Everyone says it in campaigns, but it's true: Campaigns like One Deck Galaxy exist and can be successful because of you. So we extend out heartfelt galactic thanks to each and every one of you. You make our games happen!

How Can I Help the Project?

One of the most frequent questions I've gotten while running campaigns is folks asking how they can help, because they're excited to see the project succeed, more goals get reached, etc. You definitely don't have to do this! But if you do, it's simple - talk about the game :)

Gameplay questions in the BGG forums are great, mostly because people can actually see them (Kickstarter's comment threading is...well, nobody's coming here after the campaign to look at them, are they?). Tweets, facebook threads, Tiktoks of you singing and dancing/rolling around like a Plumplim? It's all good.

The $100K Stretch Goal is for campaign sheets. Campaigns in One Deck Galaxy are going to work a little bit differently than they do in One Deck Dungeon, and we've got an update planned for Tuesday talking about ODG's Campaign Mode.  Spoilers: It's really cool.

Hello, galactic friends! (It's a perk - you back One Deck Galaxy, you get Galactic as an adjective for everything you do. Add it to your job title immediately! Galactic Tech Specialist, Galactic Tailor, Galactic Associate Manager - it's all much fancier)


Tonight at 6 Eastern (in three hours), I'm going to host a livestream teaching of the game on Twitch! You can join at twitch.tv/AsmadiGames, and we'll post a version to YouTube later for those who can't make it live. I'll play through part of a game solo as part of the teach.

Since our last Zibzab-eriffic update, we've unlocked two more stretch goals: a fifth Society type, and a fifth Adversary. Welcome the Guardians (of the Galaxy? Oops, lawsuit incoming) and the Dark Star Syndicate!

The Guardians get a pretty huge benefit: They can ignore restrictions and unlock text on Location cards! But this comes at a cost - in order to level up their Federation, you'll need to exile colonies that you've acquired. Guardians are interested in creating untouched natural reservations across the galaxy - only for looking, not for resources! You'll have to adjust your strategies to do well with them!

The Dark Star Syndicate are a very friendly Adversary, they only have one extremely simple desire, which is not really an inconvenience to you at all: They want to turn off the stars. They're a bit bright, you see, and...wouldn't it be better if they emitted dark energy instead of photons? Don't even bother opposing them, it'll all be just fine.  Imagine how cool the galactic raves will be!

(Note: The Dark Star Syndicate is still under development, it's not in the TTS mod just yet!)